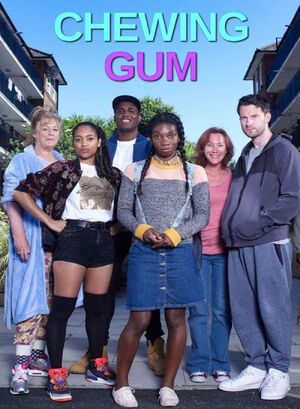 Chewing Gum is a British television sitcom set in London. It was written by and stars Michaela Coel, Robert Lonsdale, Susan Wokoma, Danielle Walters and Tanya Franks. The show revolves around 24-year-old shop assistant Tracey Gordon, a restricted, religious virgin, who wants to have sex and learn more about the world. The show won the BAFTA for Best Female Performance In A Comedy Programme and Breakthrough Talent for Coel for her work on the show.

"Comedy series following religious, Beyoncé-obsessed 24-year-old Tracey Gordon who is fast finding out that the more she learns about the world, the less she understands."

In August 2014, Channel 4 announced that Coel was to star in and write a new sitcom called Chewing Gum, inspired by her play Chewing Gum Dreams. "C4 Comedy Blaps" were released as teasers in September 2014, and the series began on E4 in October 2015. Her performance earned her the British Academy Television Award for Best Female Comedy Performance in 2016; she also won a BAFTA for Breakthrough Talent for writing the show. Chewing Gum received overwhelmingly positive reviews.

Behind the Scenes[edit | edit source]

Retrieved from "https://chewing-gum.fandom.com/wiki/Chewing_Gum?oldid=186"
Community content is available under CC-BY-SA unless otherwise noted.